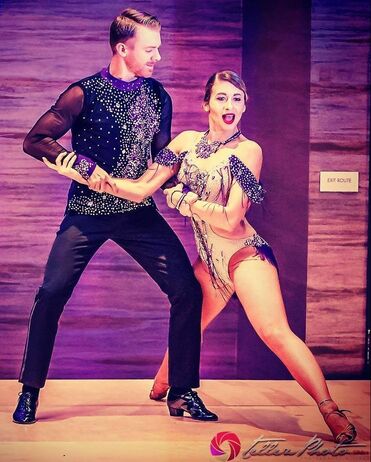 Kevin Cullinen and Courtney Lee
​Kevin has been dancing Salsa for nearly 7 years, training and performing for the last four years with Salsamania Dance Company in Oakland. In addition, Kevin, has attended countless salsa, cha cha, and bachata workshops and has helped instruct at numerous Latin dance classes over the last three years. Kevin has competed and won multiple amateur divisions at the World Latin Dance Cup (WLDC), one of the largest international latin dance competitions in the country.  Kevin competed as a professional for the first time this past December at the WLDC and took 1st place in the Same Gender Male Salsa Couple division. Kevin grew up in Sonoma County, and currently lives and works in Santa Rosa.

Courtney began dancing classical ballet at the age of four and continued with ballet/pointe, modern, and jazz throughout college. She obtained a degree in Dance Education from Marymount Manhattan College in 2011. Courtney began dancing salsa and bachata upon moving to Oakland, California in 2012. She has trained with East Bay companies including InEssence and Salsamania and has participated in intensive workshops with dancers from around the world. Courtney began dancing competitively in 2018 and won silver at in the Same Gender division of the World Latin Dance Cup. Courtney and Kevin have been dancing and performing together since 2018 and won gold for their routine at the West Coast Salsa Championships! 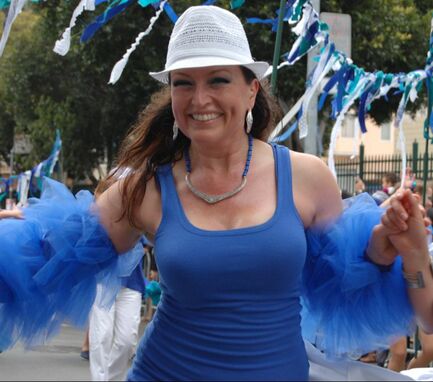 Sidney Weaverling
​Sidney Weaverling is co-director and co-founder of Rueda Con Ritmo. She first studied dance as a teenager, and after several trips to Cuba she began teaching Cuban Salsa and Rueda de Casino in 1999. She is a longtime contributor to the currently thriving Cuban Salsa scene in the SF Bay Area, has taught and performed across the United States and internationally, and now leads dance study trips to Cuba with Ryan several times a year. As a former student of theater and film, Sidney is a talented director with a keen aesthetic vision. A natural dancer and a thorough teacher, Sidney not only has a beautiful and fluid style of movement - she has the teaching experience and attention to detail that enable her to effectively and efficiently transform and inspire dancers at any level. 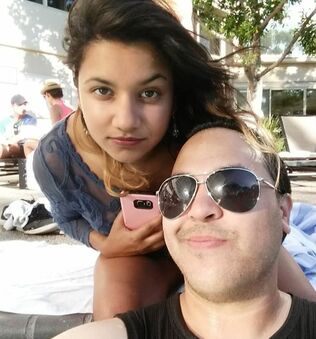 Ryan "The Rockstar" Male and
​Evie Alva"The Bailerina"
Ryan has dedicated his heart and soul to Bachata, Salsa, Zouk, and Kizomba and went from simply doing moves, to deeply feeling the rhythm and music. 8 years ago, he stepped into his first Bachata lesson, and his life changed forever. He was teaching a year later, and has since become famous for his Bachata Romantica workshop series world wide. Blending sensuality, connectivity, and love, with a variety of different dances styles, these workshops help dancers tap into their inner romantic, unlocking a dancer's personal presence and style. True to his moniker, Ryan can always be found on the social dance floor til it closes down, and has been lauded for being one of the most approachable and dedicated social dancers. Ask for a dance and you will get 110%! Two years ago, he met Evie Alva, and the instant chemistry they have has fueled an amazing partnership. She started her dance career in multiple forms of technique- martial arts, gymnastics, and eventually ballet. She has over 8 years of Latin and ballroom teaching experience: from salsa, to bachata, ballet, hip-hop, contemporary, Bollywood, zouk, kizomba, forro, samba, belly dance, flamenco, and more! She has trained and taught in India, Brazil, and USA. Together the two are bringing connection, affection, emotion, and fun back to Bachata. Get ready to open your mind and your heart! For private lessons, group lessons, or inquires, email Ryan at bachatarockstar@gmail.com And Evie at evipivikiwi@gmail.com 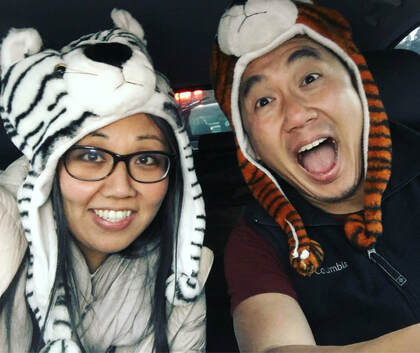 Jeff Jung and Molly Koo
Learn to dance safer, learn to dance better. Learn techniques and movements to bring safe and beautiful dancing to the SF Bay Area. Don’t be the dangerous dancer on the floor pulling moves from social media and calling it Sensual Bachata.
Jeff and Molly teach from the Korke y Judith Sensual Bachata Mastery Program (the originators of Sensual Bachata from Cadiz, Spain). Their classes are held in Santa Rosa, California. They have been teaching Sensual Bachata together since January 2018 and have enjoyed working with many levels of students under JAS Latin Dance Academy.
Jeff is a former trainer for Daniel y Desiree World Team Project, San Francisco and other teams under JAS Latin Dance Academy directed by Jose Santamaria. Molly is an aspiring dancer in both Bachata and Zouk dance styles. Together they share their passion for dance with a focus on technique and safety over pattern work in their classes. They have taught together at local venues in Sonoma County and parts of the SF Bay Area as well as festival workshops at the Humboldt Latin Dance Festival.
Jeff and Molly are members of the Daniel and Desiree World Team Project Performance Team in the SF Bay Area. They have also been training in Zouk under the instruction of Anthony and Collyane Umina, on the San Francisco Zouk Performance Team. Together they bring a variety of dance backgrounds including Salsa, Bachata, Zouk, Hula, Argentine Tango, and various other social level ballroom dances.
Jeff and Molly both work full time outside of the dance industry and in their free time try to share their passion, knowledge, and spirit to help grow open and welcoming communities of people.
Jeff is one of the founding members of Bachata Lab Productions in Santa Rosa (Organizers of Sazon’s Sensual Bachata Nights) where their mission is to grow the local dance community through supporting local businesses and social networks through fun and education in their events and activities. See their Website HERE 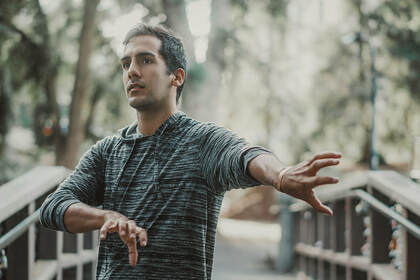 Imaan “PapaFuegz” Taghavi (@papafuegzofficial) is an international social dance instructor and pioneer based in San Francisco, CA. Having previously trained in salsa and bachata with the renowned CoboBrothers Dance Company, he now teaches, trains, and competes in Brazilian Zouk with his dance partner, Elena “The Rhinestone” Rovito (@therhinestoneofficial) and they recently took 3rd place in the 2018 Semi Pro division of the U.S. Zouk Open. He is also the Founder and Executive Director of the Omni Movement (@theomnimovement), a social dance media company that spreads the accessibility and awareness of social dancing across the globe. Their tagline: “You can dance anywhere, with anyone, to anything.”

Testimonial:: “[PapaFuegz] pays very close attention to detail... He shows how not only is he teaching new moves, but emphasizes how… I can begin to come up with my own moves.”

Check out the OMNI movevment HERE

Elena "The Rhinestone" Rovito
Elena is a Brazilian zouk instructor and performer living in San Francisco. She has a diverse background of many different arts and sports including gymnastics, parkour, ballet/jazz/modern/contemporary dance, and various partner dances. She began partner dancing in 2014, and has since competed at collegiate ballroom events, completed certifications in multiple dance courses, and taught classes all over California - from Redding to Los Angeles. Her preferred styles of dance are Brazilian zouk and bachata, but she also dances samba de gafieira, salsa, and West Coast Swing, and dabbles in many others. Elena earned the nickname “Rhinestone” when she began rhinestoning her own ballroom dresses... and then everything else she owned. Since then she has used it to embody the effect/persona that she wants to give the dance community. She has a feverish passion for teaching dance, especially easing a beginner's segway into the social dancing world. She also blogs on a regular basis, journaling her exploration of personal development and body positivity along with discussions of current issues in the social dance world. Her teaching style has been described as organized and focused yet fun, with a heavy focus on technique combined with connection & feeling. Currently she teaches weekly drop-in classes in Oakland and Santa Clara and directs a ladies’ team (Zouk Babes) in San Francisco. 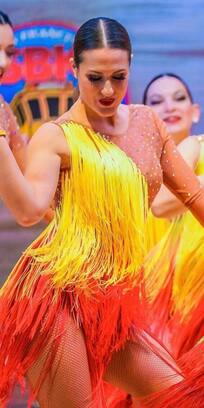 Rachel Ammerman
​
Rachel is a Latin dance instructor in San José, CA. She teaches Salsa, Bachata and Cha Cha Cha for Audaz Kids and performs with Audaz Ladies Dance Company. She has been dancing Salsa since her time in Spain in 2012. Since then, she performed with the acclaimed Masacote Dance Company and Alma Latina Dance Company in Boston before moving to the Bay Area. She has traveled extensively to train with the best instructors in Bachata, Salsa and Zouk. Using her training as both a yoga teacher and psychologist, Rachel teaches how to use mindful movement to connect with ones self through dance. Rachel loves social dancing, both leading and following, so don’t forget to ask her to dance! 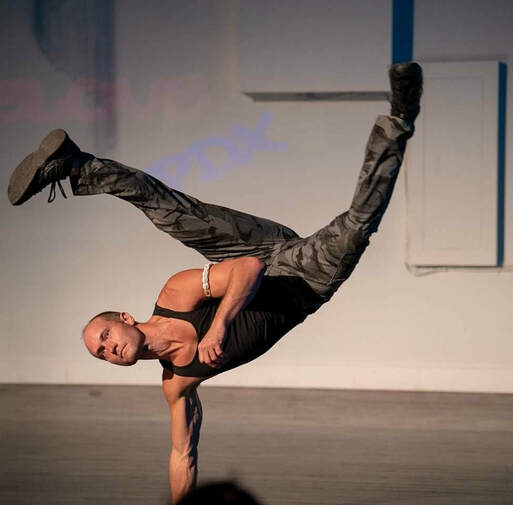 Joel Beall
Joel Beall was born and raised in Northern California in the Sierra Nevada foothills. Joel (A.K.A Professor Irmao) found capoeira 18 years ago at the age of 17 and is now a Formado (professor) of Capoeira. He is A professional Instructor of Capoeira and Lambada Zouk at Move Studio in Sacramento, CA. Finding Lambada Zouk when he was training Capoeira in Northeast Brazil in 2010. He has had the privilege to learn with such great Lambazouk teachers as Marie Hodges, Pablo Schmoller, Braz Dos Santos, Patricia, Didi, Leo Bruno, Shani Mayer, Romina Hildago, and Olaya White Dendê. As founder of Sac Capital Lambada Zouk, the preservation of Porto Seguro, Bahia Lambada Traditions and techniques is crucial. Energy and Fun is top priority! He has been honored to participate and teach at such great zouk congresses as: L.A Zouk Congress, Dansa Brasil Zouk Congress Barcelona, Grand Canyon Salsa Festival and Seattle WA. Center of the Universe Zouk Congress, Las Vegas Afro/Latin Congress, San Francisco Bachata Congress, and also attended the 2016 Rehearsals for Brazouka Dance Company in Porto Seguro, Bahia! 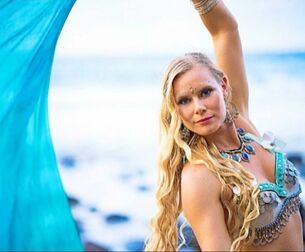 Ariel Poling
Ariel Poling has over 20 years of Bellydance experience. She moved to Tahoe in 2018 from Kauai, where she spent over 10 years teaching, performing and running her own Bellydance Company called Sudeeka, as well as a Bellydance Program called Sudeeka SEEDs. Prior to Kauai, Ariel began studying Bellydance in Santa Fe NM, with Myra Krien, at the young age of 13. She spent 6yrs in Myra’s school of Middle Eastern Dance and her Professional Company. She then became a member of Masnavi Dance Collective for another 3yrs before moving to the islands. Ariel continues to spread the knowledge and beauty of Bellydance, as she now teaches classes at Tahoe Flow Arts Studio in Tahoe. She also continues to expand her dance vocabulary as she currently studies Lambada Zouk Fusion with her partner and teacher, Joel Beall.